Okay, so the good news is – we don’t have to see that lame, make-believe band anymore in Experian’s freecreditreport.com TV spots. The bad news is that Experian is still up to their old tricks.

Experts in personal finance have long criticized the campaign from Experian for freecreditreport.com for taking advantage of consumer confusion between the Experian Web site, which sells a subscription service costing $14.95 a month, and the official Web site for free reports, annualcreditreport.com.

Music lovers have hated the campaign because that fake band is so goofy. Now, as Experian introduces a Web site devoted to credit scores rather than credit reports, there will be an actual band singing its praises. It wasn’t the lip-synched vocals that bothered me. What annoyed me the most was that the band’s vocalist/guitarist was the worst “fake guitar player” I’ve ever seen. This guy couldn’t take ten minutes to learn a few simple chords?

A commercial for the debut of freecreditscore.com, and the winning band, a Detroit area outfit known as The Victorious Secrets, is scheduled to appear during the 2010 Video Music Awards on MTV on Sept. 12.

Experian believes a real band will generate more “social media buzz” because they can actually show up at events and play live. Now there’s a no-brainer. Makes you wonder why they didn’t recruit a real band in the first place.

But I’ve already seen some negative buzz from people who say that, when you consider the thousands of plays the new commercials will get, this band is getting ripped off. This could magnify Experian’s image problems and shine a brighter light on their deceptive practices. So stay tuned.

I wonder if they’re going to rename the band – Question Mark and the Experians?

C-K's Cultural Dictionary is fun and a smart self-promo tactic.

Here's another reason why I think some of the world's most inspired creative thinking comes from Chicago. Cramer-Krasselt, the Chicago-based shop that is, I believe over 100 years old (makes Burnett look like a youngster) has launched the third edition of its "Cultural Dictionary."

Ecochondriac - The woman in the next cubicle who can't stop talking about apocalyptic climate change.

Hopetimism - The ability to believe in the best possible outcome.

Gagalicious - An adjective for outrageous, ornate or over-the-top style.

The point of the project -- now in its third year -- is to present a tiny "cultural snapshot" with each word, and a little insight into the trends and events that spawned them. Fans can go to http://www.c-k.com/cultural-dictionary/ to "like" or "dislike" words. This is fun stuff, worth a look. And clever self-promotion by C-K, associating their agency with what’s up-to-the-minute hot in American culture. Sorry Sarah Palin fans, no sign of “refudiate” here.

Many, of course, are custom-made for marketers and media types. 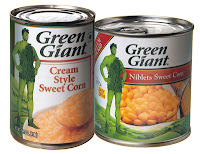 Chicago-based creative powerhouse agency Leo Burnett, part of the Paris-based Publicis Groupe since 2002, celebrated its 75th anniversary last month. Do a little quick math and you’ll ponder this was a pretty big gamble for a 44-year-old former newspaper reporter to take smack in the middle of the Great Depression. But as we all know, the gamble paid off big.

Admit it or not, quoting the Chicago Tribune’s Phil Rosenthal, your stream of consciousness "includes plenty of runoff from Burnett brainstorms," especially if you’re over the age of 30.

You would never think of Marlboro as a women's cigarette, but that's how the brand was introduced in the 1920s. In the mid-1950s, Burnett and company repositioned the brand with the Marlboro Man, and after all these years, he still stands tall as the macho man of tobacco-land. Even if you’re too young to remember cigarette ads on TV, you know the icon.

The Green Giant Co. was the first Burnett client. How good was the Jolly Green Giant, introduced in 1936, as an advertising icon? The original name of the company was the Minnesota Valley Canning Company, until the Giant became so big, he overshadowed everything else.

My favorite Burnett quote – “When you reach for the stars you may not quite get one, but you won't come up with a handful of mud either.” Nothing fancy about that. Burnett believed in keeping things simple, easy to read and understand, and memorable. And he literally regarded a great ad as “the most beautiful thing in the world.”

They don't make 'em like that anymore. With so much of today's advertising being derivative, sloppy, thoughtless and often too complex to remember the brand, we can all take a lesson from an Ad Man who died before many readers of this blog were born, but whose ideas continue to build good brands and increase sales. 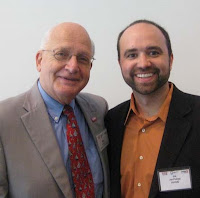 The Custom Content Council presented "Custom Media Day in New York 2010" and SAS business development associate Mike Eisgrau covered the story as only he can, filing an interesting and very encouraging report as to the present and future of custom content marketing.

Among this year's conference speakers was Zinio.com VP Nicholas Pavach, who told the group he has "no paper phobia" – that there will still be a need for print magazines, even though that content will appear more and more via the digital world of Blackberries, iPads, iPods and PCs. He illustrated the point with a study showing that while 41% of readers pay more attention to ads in digital magazines---59% are still paying more attention to those same ads in print. In the healthcare field that translates into nearly 60% of readers of our magazines responding to the content by holding print publications in their hands---whether in a medical office or at home.

Speaker after speaker made the point that custom publishing has entered the digital world big time---in the healthcare field and many other areas.

Conference moderator Joe Pulizzi, the self-described Content Marketing Evangelist and founder of Junta42, sees a long and prosperous future for custom content marketing. He told his audience: "We are just getting out of the dugout for a nine-inning game. We are in our infancy."