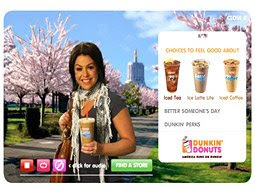 The news about the flap over Rachael Ray's scarf in a Dunkin Donuts online ad still has me shaking my head in disgust.
After conservative bloggers suggested the scarf she wore in the ad looked like a keffiyeh, a traditional headdress worn by Arab men that some associate with jihad, Dunkin Donuts pulled the ad. I don't know whether this is a case of shame on the right-wing bloggers who seem to live in a world that is as black-and-white as the scarf itself, or the advertiser, who in this case demonstrated a clear case of spinelessness.

In her post of May 28, right-wing blogger and Fox News contributor Michelle Malkin stated, "The keffiyeh, for the clueless, is the traditional scarf of Arab men that has come to symbolize murderous Palestinian jihad. Popularized by Yasser Arafat and a regular adornment of Muslim terrorists appearing in beheading and hostage-taking videos, the apparel has been mainstreamed by both ignorant (and not-so-ignorant) fashion designers, celebrities, and left-wing icons."

Apparently the suggestion is that if you didn't think, "hey, that's a terrorist scarf" when you saw the ad, you are clueless. Forgive me for attempting to be "fair and balanced" here, but it's just sad that right-wingers like Malkin equate a particular piece of clothing with terrorism. Ms.Malkin has since been reminded by more broad-minded media types that the scarf happens to be quite popular among our own U.S. troops in the middle east because it does quite a good job of keeping the sand out of one's eyes. Put your arrogance aside, Ms. Malkin and admit that you've really put your foot in it this time.

Here's the statement issued by Margie Myers, senior VP-communications for Dunkin' Brands: "In a recent online ad, Rachael Ray is wearing a black-and-white silk scarf with a paisley design. It was selected by the stylist for the advertising shoot. Absolutely no symbolism was intended."

Almost as sad as this right-wing, "terrorists are under the bed" pandering is that Dunkin Donuts didn't honor their spokesperson by issuing the statement and then letting the ad stand. Rachael Ray is the only one coming out of this looking good - cute as hell and smart too - she's made no comment at all.

Not to be belabor the point, but here's a thought, maybe Sharon Stone should have taken some advice from Rachael before she made her irresponsible comments about the Chinese! Now there's a case where you can put the blame firmly on the celebrity. Beautiful, but apparently not so smart.
Posted by Adman97 at 3:18 PM 10 comments:

Blowing the dust off the lion and crown

I attended a program last week by the Tampa Bay chapter of the AMA. This one was on a topic that I've written about before - the new branding effort by the Ritz-Carlton. Tanya Khuu of Saatchi & Saatchi's Team One was the speaker. She's the Senior Strategic Planner behind the new R-C effort. Tanya gave a very interesting talk about how Saatchi was able to win the business back in 2004 when it came up for review, without having previous hospitality industry experience.

My take-aways from this program -
First, it was refreshing to learn of a client who was willing to go "out on a limb" and hire an agency with genuinely fresh ideas, not cookie-cutter approaches that are safe and utilitarian.

Next, the agency's approach to the business was exactly what I would have done. Khuu described how the agency made a distinction between consumers who are status seekers and a group she describes as "Discerning Affluents." The latter is a group of people who have made luxury accommodations part of their lives. The established model of hotel advertising, using beauty shots of the facilities, doesn't resonate with this audience. They know the hotel has a nice looking lobby and the guest rooms are well appointed. They want to know that the hotel "gets" them and wants to be a part of their lifestyle. In the face of increased competition from the new crop of "boutique" hotels - the Delanos, Mandarins, W's, etc. - this is crucial.

Khuu ran down the R-C brand architecture for us, and that was also quite interesting, if not unique to the R-C program.

The star of the show, of course, is the series of three short films the agency and the R-C produced in partnership with American Express. They decided to take the money Amex was offering and, rather than using it for e-mail blasts, produce something truly unique. Unfortunately, due to some technical limitations, she couldn't show us the films in her slide presentation - probably some PC related thing - but most of us had seen at least one of them before. The plan, so far, is to keep them on the web only, and Khuu says they have indirectly generated over $1 million in new revenue for the R-C. That's right - it's not just creative for its own sake; the films, print and other executions of this campaign have increased the R-C's sales significantly.

So, let's review - a very hip, intelligent agency, a client not afraid to step outside the box and some very good work that is generating increased sales and turning heads all over the industry. Not too shabby. And, no wonder Ms. Khuu is so busy going around talking about the program. It's a win-win for Saatchi and the R-C and a big win for branding too.

I left with renewed enthusiasm, but also wondering how we can we get more people on the client side of the desk to think outside the box - something they ask us to do every day - and take a serious look at hiring agencies that can take a more objective approach to common problems. In this case, Saatchi developed some very sound strategies and strategic creative solutions. They really did blow the dust off a brand that was getting kind of stuffy. And they didn't wreck it. They made it even better.
Posted by Adman97 at 2:28 PM No comments: