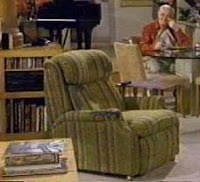 Have you seen the new spots for La-Z-Boy with Brooke Shields?

This is one of those times when my reaction is mixed. Sure, I understand the strategy – get a classy, female celebrity spokesperson to counteract the “lazy man’s recliner” image of this well-known American brand (I can’t help thinking about Martin Crane’s duct tape-clad lounger on TV’s Frasier) and bring anti-recliner furniture shoppers into the galleries.

As Stuart Elliott points out in his NY Times piece about the campaign, La-Z-Boy and Santa Monica-based agency RPA (the brand’s agency since 2007) are trying to tell furniture shoppers that La-Z-Boy is not just for recliners anymore. Kind of like how Florida’s citrus growers famously told fans of orange juice that “it’s not just for breakfast anymore.”

The fact that La-Z-Boy is synonymous with “recliner” is a happy problem for a brand to have, I suppose, but the challenge here is to remind consumers that they make plenty of furniture that does not recline.

Now here’s the potential downside. Ms Shields has been so overexposed commercially – appearing in ads for Colgate toothpaste, Volkswagen and what seems like a hundred others, I’m wondering how effective this campaign will be.

Time once again for that annual plague upon American society known as “Christmas Creep.” No, I’m not talking about your creepy Uncle Walter; it’s those crazy retailers again.

I understand as well as the next guy that retailers are anticipating – or should I say praying for – a better year this year, but does Christmas have to come before Halloween? According to a recent AdAge.com story, the bulk of major retailers are still kicking off holiday campaigns nearly two months before Christmas. Best Buy began its holiday effort on Nov. 1, 10 days earlier than last year.

Kudos to Target. Once again they take the high road by not playing this game. Their main holiday campaign won't launch until the weekend after Thanksgiving.

I can’t imagine the parents of young children getting used to this – having to juggle Halloween, Thanksgiving and Christmas shopping all at once. No wonder they're all beginning to have that "reindeer in the headlights" look. Glad my offspring are grown.

Now help me figure this out – is Black Friday the Friday before Halloween, or the one before Labor Day?