In a story published April 22 in Ad Age, Rich Thomaselli reported the advertising industry is rallying in opposition of a provision in the Financial Reform Bill that could extend the power of the FTC to uncomfortable new levels.

The 4-A’s, the Direct Marketing Association and the AAF are among 30 groups that delivered a letter to the U.S. Senate and took out a full-page ad in the influential Capitol Hill newspaper, Roll Call, spearheading an effort to prevent the Federal Trade Commission from once again becoming the "nation's nanny."

The groups say a "hidden" provision in the already-passed House of Representatives' version of the Financial Reform Bill (H.R. 4173) would expand FTC power and restore the broad rule-making and enforcement authority the agency enjoyed prior to 1975, when Congress imposed restrictions on the FTC with the passage of the Magnuson-Moss Warranty Act.

The ad industry groups and others believe the provision that would grant the FTC greater power over unfair and deceptive ad practices has no business in a financial reform bill. They fear heavy-handed tactics and an atmosphere where the FTC has too broad an authority over many different industries.

Could the "gloom and doom" be finally over?

Great story on Forbes.com about how advertisers are rolling out carefree campaigns that use humor, colorful images and upbeat language to get consumers to lighten up--and open up their wallets. But hey, isn’t that what advertising is supposed to do?

While none of us could ever get two economists to agree whether the real tough times are finally behind us, leave it to advertising to lead us to our happy place as consumers. Sure, people are still unemployed and facing foreclosure, but when the gloominess of our reality begins to seep into advertising, most of the resulting executions are pretty lame. And they come off as pretty insincere. Advertising should be happy, uplifting, humorous. That's what we expect. 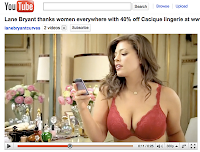 In a post on the company’s Inside Curve blog, plus-size retailer Lane Bryant complains that two networks -- Fox and ABC -- are trying to censor them by resisting the airing of its sexy Cacique lingerie ad. Fox wanted edits, then wanted to restrict them to the final 10 minutes of American Idol.

This story is interesting for several reasons. First, it's an example of hypocritical these two networks in particular - the right wing Fox and the Disney-owned ABC - really are.

So why give LB this kind of static when both networks have consistently broadcast other racy ads (think Victoria’s Secret) and programming (like the sexually-charged Desperate Housewives). I know the TV networks have a tough time dealing with the needs, wants, desires, prejudices of their affiliates, particularly in the Bible Belt, but come on. Let's grow up. Or could it be that Victoria's Secret is such a powerhouse advertiser, they don't want LB encroaching on their turf?

LB has made the most of this whole thing - and who can blame them? I've gone to the blog, watched the spot in question - Yes, it's great work. Very sexy, but also very tastefully done. The consumer reaction seems overwhelmingly favorable. People get it. Why are the stick-thin, but amazingly ample-breasted females on the Victoria's Secret ads deemed to be "normal" while the bigger, more curvy women represented by LB seen as being too fat for prime time? We're not talking obese here. We're talking normal.

One of the comments posted at LB's blog brought up a good point. If you go back to pre-Farrah Fawcett America, pre-Super Model America, back to the Mad Men era of the late fifties/early sixties, the Marilyn Monroe body, which I believe was a size 10, was considered the ideal. Nothing wrong with those curves either.

Watching American tonight. Let's see if they air the sexy Cacique ad, or just the tamer one.