Ikea betrays design community and its own brand personality with use of an ugly, stupid font. 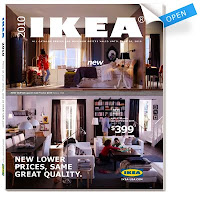 According to a recent story in TIME, the design community feels betrayed over Ikea’s switch to the Verdana typeface, and is ranting about it. Some may find it hard to believe that changing a type font is worthy of a global backlash, but when you think about it, graphic designers the world over do have a legitimate gripe. Verdana? That Microsoft font? The one used everywhere for the text on every Web site in creation?

Ikea’s signature typeface, a customized version of Futura, has long been an integral part of that brand. But effective with its recently mailed 2010 catalog, they’ve switched to switched to what it sees as a more functional typeface: Verdana. In the process, it has provoked an instantaneous global backlash, the kind that can only happen on the Internet. Ikea fans from Tokyo to Melbourne have ranted - "Ikea, stop the Verdana madness!" "Words can't describe my disgust" and "Horrific." Carolyn Fraser, a letterpress printer in Melbourne, Australia, sums up the problem quite well. "Verdana was designed for the limitations of the Web — it's dumbed down and overused. It's a bit like using Lego to build a skyscraper, when steel is clearly a superior choice."

Ikea spokeswoman Monika Gocic was quoted - "It's more efficient and cost-effective. Plus, it's a simple, modern-looking typeface."

Efficient? Cost-effective? What about remaining true to your brand’s personality? I have news for you Ms. Gocic. Verdana is an ugly font, period. And a font created by Microsoft? Yuk. Don't you feel like you have to take a shower, Ikea?

This mess reminds me of an old episode of “This Old House” in which Bob Vila was observing an old school plaster craftsman on a job. He asked the man if he was going to finish it off with a little sandpaper to smooth it out. The perturbed man simply replied in his New England dialect – “Sandpaper, Bob?”

So it would be appropriate to ask, in this case, “Verdana, Ikea?” What were you thinking?

VW says goodbye to Crispin - can boring VW ads be the result?

As reported in AdAge , VW will say goodbye to Crispin, Porter & Bogusky after a four-year run and is reviewing to find a new U.S. agency of record for its $200 million-plus account. Automotive News reported that VW saw its share of the U.S. market climb to 2% from 1.6% through July. The fact that VW’s sales declined only 13.5%, compared with an overall industry nosedive of 32% says they must be doing something right. Has it been Crispin’s work? Hard to say, since they seemed to be trying so many different things – a bit confusing, even for a big VW fan like me.

I see so many VWs on the road these days, it’s hard to believe they only have 2 percent of the U.S. auto market. And after more than fifty years in the U.S. market, VW is still perceived as a “quirky” brand in this country. Has Crispin’s work contributed to that image, or has it attempted to “mainstream” the brand?

I’ve been driving VWs for several years now. I can say that all they have to do is get people in the driver’s seat – let them experience a bit of that “fahrvergnugen” – and when they realize how comparatively antiseptc and non-driver-like the Japanese products feel, the purchase decision will be a no-brainer. Hard to beat them in the overall driving experience / quality / value ratio, no matter whose cars you're shopping. With the exception of some reliability issues - mainly with Beetle and Toureg – the VWs have been solid. The Jettas and Passats are slam-dunk winners and excellent values – BMW/Mercedes-like driving experience at a Joe Lunchbox price.

It will be interesting to see if "mainstreaming" the brand, as it seems the VW corporate folks want to do, will help VW or hurt it in the U.S. Since the U.S. only represents about 5% of their global market (remember they are the biggest car company in the world) it may not make much of an impact. But please, VW, let's maintain that Bill Bernbach tradition of creative, thoughtful advertising.